A Taste of How it's Made...Bacon

When planning a meal, finding the perfect ingredients, cut of meat, and cooking method will play a huge role in how your dish turns out.

This also applies to the creation of one of America's household staples: bacon.

Whether you enjoy traditional pork bacon or a leaner turkey bacon, APPLEGATE® has an option for you! 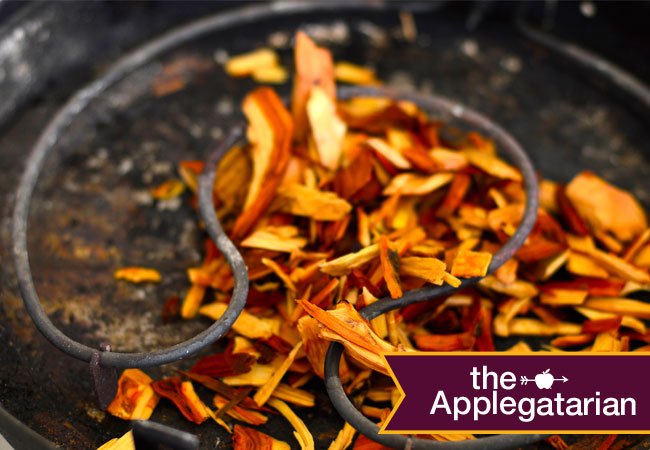 APPLEGATE® pork bacon varieties use pork belly that is injected with a marinade or brine, then hardwood-smoked for several hours using hickory wood. This process gives that smoky bacon flavor that we all know.

Unlike pork belly, the cuts for our turkey bacon are smaller and come from the thigh meat of the turkey. It is lightly chopped, combined with a marinade, then blended together.

Marinated turkey is then hardwood-smoked using hickory wood. During this time, the temperature of the smokehouse partially cooks the turkey bacon so it can then be chilled, sliced, and placed into its packaging.

At Applegate, we use real hickory wood and smoke for several hours to give our bacon a smoky taste.

Unlike other meats, bacon gets almost all of its flavor from the smoke used during the smoking process. Different types of wood can create subtle changes in flavor. One of the most popular woods for smoking is hickory, but other options include applewood or cherrywood for a slightly sweeter profile.

"Our APPLEGATE® SUNDAY BACON® bacon and No Sugar pork bacon are always go-tos for me because they have that traditional smoky flavor," said R&D Scientist Lauren Koller. "They make great BLTs with avocado, and you'll have a few slices left over to crumble into omelets, hash browns, brussels sprouts, or anything that needs some smoke."

To expand on the flavor profile, we use spices, herbs, and sometimes different sugars in the marinade. Different cuts of meat can also change the flavor.

In order to call a product "bacon" under the USDA's standard of identity, pork belly needs to be used.

If another cut or species is used, those have to be differentiated in the name, such as "Turkey Bacon," and the type of cut needs to be in the descriptor, such as, "made with turkey leg meat".

Traditionally, when making pork bacon, the pork belly is used because it is a fattier cut and generally more rectangular in shape, which lends itself well to creating thin slices. Pork shoulder is commonly used for pork shoulder bacon, which has less fat, but does not crisp up as much as bacon from pork belly.

Similarly, turkey bacon can be made from breast meat, but that can dry out more than thigh meat, since it is extremely low in fat.

Check out our other features in the "How it's made..." series.

Have you ever wondered how our APPLEGATE® deli products have that delicious, natural taste? Would you like to learn more about prosciutto? We’re here to give you a peek into how we make your favorites.