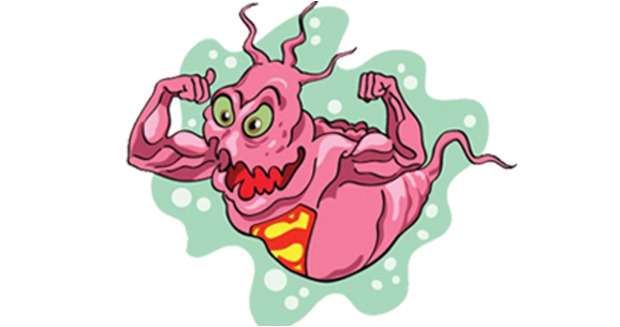 Yesterday I introduced some pretty scary statistics about antibiotic resistance and today I want to go into more depth about how it all works.

"Aren't antibiotics for strep throat and ear infections?"
Antibiotics are one of the most important inventions of modern medicine. In humans they're used to treat health conditions that are caused by bacteria, including ear infections, strep throat, food poisoning, and serious conditions like pneumonia and meningitis. They also help prevent infection after medical procedures like surgery.

But the majority of antibiotics in the United States -- more than 30.6 million pounds in 2010 alone -- are used in industrial farming, where they are administered to health animals to artificially speed up growth and to make up for unsanitary living conditions. Most of these antibiotics are used without any oversight by a veterinarian.

"What's a Superbug?"
When bacteria are exposed to antibiotics on a regular basis -- the way they are when antibiotics are routinely and non-therapeutically used in industrial farming -- they begin to develop new traits to protect themselves. Much like how people develop immunities to certain diseases when they're exposed to small amounts of them through immunization, bacteria develop immunity to antibiotics when they're repeatedly exposed to them, leading to new, stronger strains of bacteria. Basically, what doesn't kill them makes them stronger. These resistant bacteria, or "superbugs," have adapted to the point where certain antibiotics can no longer kill them. This means some antibiotics are no longer effective for treating specific diseases.

"But I always cook my meat to well-done -- am I okay?"
It's true that being diligent about food safety is important in preventing foodborne illness. Most of us already take steps to prevent foodborne illness from affecting our families, including cooking our meat thoroughly and being careful about spreading potential bacteria from uncooked meat, carefully washing our produce, and purchasing pasteurized products. We can help keep our families even safer by choosing meat, poultry, and dairy products from companies that don't administer antibiotics to their livestock and who raise their livestock in healthy, sanitary conditions.

But it's not enough. Industrial farms create tremendous amounts of concentrated animal waste -- over one billions tons each year -- and much of that waste is full of antibiotics and antibiotic-resistant bacteria. An estimated 75% of the antibiotics administered to farm animals are not fully digested and enter the environment as waste products, where they can encounter other bacteria and create more antibiotic resistant strains. Because of the huge amounts of waste produced by industrial farms, these bacteria can enter and contaminate the water supply.

Everyone is at risk when antibiotics no longer work, but children, the elderly, and people with weakened immune systems are at greatest risk. So it's incredibly important that we take steps to curb the tide of antibacterial resistance.

"So What Can We Do?"
Actually, a lot. Tomorrow I'll talk about what to look for when purchasing meat and poultry products to make sure the food you feed your family is free of antibiotics. Thursday, I'll discuss the real cost of producing food and why it's important to vote with your dollars and buy sustainably produced food products. And Friday, I'll talk about ways that we can take action to protect our families against superbugs -- and keep antibiotics working for future generations.